Departing from Gardy, discover Conques its abbey church and the village. On the way back, stop at Marcillac and Salle la Source.

A VILLAGE OUT OF TIME

Stroll through the medieval streets of one of the Most Beautiful Villages in France. Soak up the spirit of the place  !

Inside a wavy plateau made up of schists or granites, the Lot and Dourdou rivers and their tributaries have opened up a network of winding and deep valleys, forming the Ségala de Conques. Here, the gorges carved out by the Ouche torrent, on the verge of joining the perpendicular valley of the Dourdou, widen somewhat and form a sort of circus whose concavity – the “conch” – cuts the plateau to the horizons. tabular. It is a real hollow relief. Steep slopes, outcrops of rocks and dark patches of chestnut groves create a landscape that is both austere and grandiose.

All travelers, since writer Prosper Mérimée , also inspector of historical monuments, who admitted, in 1837, not to be “Not at all prepared to find so much wealth in such a desert” , were struck by the “wild” aspect of the Conques site. However, this natural setting is particularly well chosen and has certain climatic advantages. The abbey and the village are installed on the sunny slope and sheltered from the north winds, high enough to escape the humidity and mists of the valley floors. Abundant springs brought them the water essential for life.

“It is quite obvious that the reds, the blues, all the violent colors that one meets in the Gothic stained glass windows north of the Loire could only harm the delicacy of the coloring of the stones and the interior space of this building. I made a point of respecting the identity of this building, in no way disturbing the specific quality of the space as it results from the dimensions of the bays, from their very particular distribution. Only natural light seemed to suit him ”.

Paradoxically, Pierre Soulages in Conques has chosen so-called white glass, that is to say colorless – which respects the wavelengths of natural light – for his stained glass windows intended to replace the historiated and polychrome panels in place. after the Second World War. 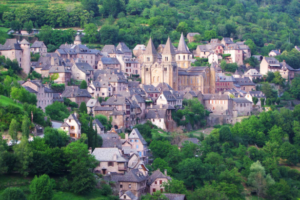 The Salle la Source waterfall and its crafts museum

The wine, the ratafia, the sun and the fouace

Discover the culinary specialties of the department!

Necessary Always Enabled
Necessary cookies are absolutely essential for the website to function properly. This category only includes cookies that ensures basic functionalities and security features of the website. These cookies do not store any personal information.
Non-necessary
Any cookies that may not be particularly necessary for the website to function and is used specifically to collect user personal data via analytics, ads, other embedded contents are termed as non-necessary cookies. It is mandatory to procure user consent prior to running these cookies on your website.
SAVE & ACCEPT